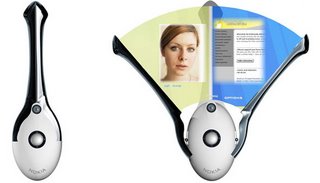 Check dis Out, A Possible Futuristic Design of a Nokia Phone

We love fun, implausible concept designs as much as the next guy, but this one in particular seems kind of far-fetched. The "Nokia Open" is/would be a cell phone that opens like a fan with a "scrollable touch screen," which seems to be an essential-yet-nonexistent item that would need to be invented in order for this to work. The idea is that with the push of a button the thin phone opens up, revealing a spacious screen on which buttons and menu options appear for you to manipulate with your digits. All well and good, but a cell phone that appears before you on the wings of a magical eagle would be cool too, though I'm not expecting Nokia to start marketing it anytime soon. Perhaps with the advent of flexible e-paper on the horizon, this isn't totally unimaginable, but it certainly is at least a decade off. Eventually we'll probably see flexible displays used in portable devices in some regard, but to design devices before the technology is… well, science fiction, really. But hey, designer Hugo Danti should keep up the Photoshopery; he's got talent.

You Can Visit the Designer's Site: Hugo Danti

Lets Wait 4 Such Phones, Really Sleek n Cool
Posted by KreativeGeek at 1:43 AM