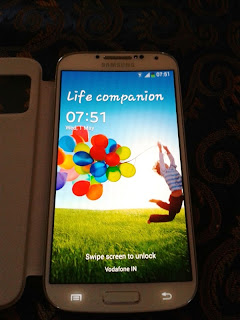 ﻿
I enjoyed using Galaxy Note for the past 1 year and when Jelly Bean was finally made available, I still thought it would last through the final OS upgrade release - Jelly Bean 4.2.2 as announced by Samsung.

Jelly Bean upgrade caused performance issues on my Galaxy Note straining phone processor and RAM post which I uninstalled lot of apps which were not used often and re-formatted phone to factory preset once, this did not help much and I noticed battery draining slightly faster in spite of keeping features like smart stay off. 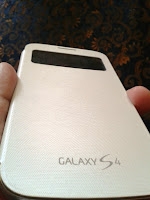 After Galaxy S4 was announced in March’13, what got me interested in this phone was the arrival of New Exynos 5 processor on-board with octa core processing capability and obviously added perk of getting next version of Android OS Key Lime Pie upgrade when it happens in future.

Just the right time to upgrade on to Galaxy S4 with fresh hardware and some new OS features packed into this offering from Samsung; however I was also looking at Note II as an option since it is equally good on hardware specs and with a 3,100mAh Li-ion battery as it still stands as a great upgrade for original Galaxy Note consumers.

Personally I feel a 5-inch screen best suits my preference for a smart phone, and going beyond this screen size is good enough to get a tablet with calling facility rather than changing mobile phones blurring the line between a “Phablet” and Tablet these days.

I ordered Frost White S4 on the day Galaxy S4 was released in India via Samsung’s E-Store, received phone over the weekend with promotional accessory content (Regular Flip Cover and S-View Flip Cover) eligible for first 400 online orders, here’s my take on this phone to check if it really qualifies as a strong contender among top Smartphone’s of 2013.

(Please note: My review has reference to difference in overall hardware and android experience from original Note, I have not used or tested iPhone 5 / HTC One to draw any comparisons here in terms of performance) 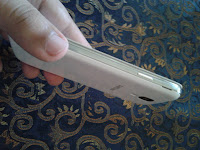 Design and Form Factor: Being a little thinner than Galaxy Note, Galaxy S4 has got elegant looks with modern design. Metal band that wraps around the phone body adds a touch of premium finish to the otherwise plastic body criticized a lot on Samsung flagship phones.
Presence of this plastic cover does hurt some customers for a phone on which you are spending good amount of money; if you wish to replace OEM cover there are some good aluminium metal based S4 cases available on Global EBay website to shop for. Going by some rumours Samsung has already started taking this feedback around plastic body into consideration for next Galaxy Note 3 launch planned later this year.

Many reviewers felt Samsung should have not stuck so close to S3 design which is true as even in India among the Galaxy phone range like Galaxy Grand, Galaxy Win and Galaxy S Duos look very similar in design. S4 is not a head turner in any aspect.

Galaxy S4 comfortably fits into trouser pockets even with 5-inch screen size, this is with the S-View flip cover, however it feels little tacky while using with single hand around the edges due to the extra screen space created by minimizing bezel area, so handle with care. You can extend your thumb across screen diagonally during regular usage slightly better as compared to Galaxy Note. 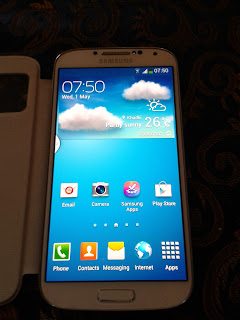 Screen:  Full Super HD AMOLED display (1920 x 1080 pixel) does leave a good impression on your visual senses, S4 has clarity of 441 pixels per inch, much ahead of iPhone 5 (326 ppi) and the Galaxy S3 (306 ppi), however I could related to similar slick display on my Galaxy Note screen earlier after it received Jelly Bean OS update, eventually it falls short to qualify as a game changing feature.

Watching a 1080p HD video locally stored on the phone or streaming is where you would notice difference in clarity and crisp output, in terms of colour reproduction darker shades come out little over saturated. Under the display option in settings menu you can find Adapt Display feature which automatically adjusts the colours and saturation of the display based on what you’re doing on the phone to give you the best display settings based on your task.

Auto Brightness feature is easy on eyes on S4 while operating at night in a darker ambience around though the smart screen feature does not work in such condition, I could not get such brightness adjustment options on Galaxy Note earlier without using an Android app called Lux Auto Brightness. 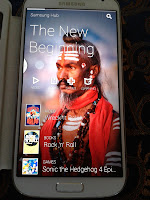 Phone and Software features: Samsung S3 and Galaxy Note II users would not notice a big shift in the overall feel and look of Jelly Bean 4.2.2 OS, however accessing it on S4 is much smoother and lag free. Installing apps over Wi-Fi and 3G from Google Play Store is fast and improved in comparison to my experience from Galaxy Note.

Air Gestures and Smart Scroll aim to bring a touch free interaction for consumers, tried smart scroll on default android browser which was able to track my head movements, still this kind of technology would take time to perfect as it struggles to track subtle movements.

Air view feature feels little odd to use sans the S Pen, text magnifying air gesture did not seem to work on the stock browser, Air gesture feature for accepting and rejecting calls worked well. There is an option on the phone under help section to explore all these new features on Galaxy S4 which you can try.

Another addition to the feature list is the option to include widgets on your lock screen which also come in handy to offer you quick access to frequently used apps. There’s a unified messaging hub also available, this is a feature I feel should have being made available on the home screen rather than just the lock screen.

Watch ON app allows you to operate your TV and DTH device from your phone and download program listings, It worked on my Phillips TV, yet to try on Tata Sky DTH as it requires mapping by set top box manufacturer name, I was also able to transfer S Memo data from my Galaxy Note back up to S4 seamlessly.

S Health is a fitness companion app to watch out for as Samsung has additional accessories lined up to launch which would sync data to your phone via this app; it allows you to track your walking steps and other exercise activities along with recording your daily calorie intake.

Samsung Apps and Samsung Hub have undergone a complete UI overhaul, I liked the overall design and layout of these apps however they also hog a good amount of phone memory while bringing in this rich UI experience and the way Samsung Hub has being categorized into Videos, Books, Games and Learning, Samsung is making a futile attempt in trying to compete with heavy weights like Google Play Store and Apple’s App Store with limited content and lot of duplicate apps which are already available on Google Play Store.

I also doubt if I would ever be able to use group play app the way it is being advertised, other additions like Optical reader (Augmented reader), S-Voice, Story Album and S Translator complete the Samsung app suite on this phone.

Battery: Removable 2600mAh battery on S4 takes roughly 3 hours to full charge. I have being able to squeeze an entire day with my usage pattern similar to what I had on Galaxy note. I am happy with the battery performance as it is giving me better back up than my earlier phone, yet to subject this phone to continuous usage for identifying heavy usage results.

Camera and Video: Galaxy 4 also brings in a fresh look to the Camera UI making it easier to cycle through 12 preset picture modes on screen rather than hunting for them inside camera menu while taking a picture. S4 camera allows maximum picture resolution of up to 13 Megapixels (4128 x 3096). Anti shake option is available for both video and picture modes.

Clarity of videos shot at 1080p is very good, however videos get little grainy in low light conditions. Switching to video mode from picture directly commences recording with a momentary pause, you can try using a mix of slow and fast shooting modes while compiling a video montage.

Photosphere feature available on stock Jelly Bean may not make an appearance on Samsung phones; rather a similar S Orb option is touted to be available first on Galaxy Note 3 later this year, some other notable camera features listed below

• Dual Camera feature works both with pictures and while shooting video.
• Sound shot allows you to record audio for up to 9 seconds after you click a picture
• Drama Shot captures a time lapse image stitched together binding a series of motion shots
• Animated Photo creates a gif image which can be customized with option to choose animation direction on the image.
• Eraser Mode allows you to remove unwanted subjects from your photos which requires you to keep your camera preset on this mode while camera is in use, this is not a post processing feature so if you want to erase anything from your photos already clicked, try an app by the name Touch Retouch. 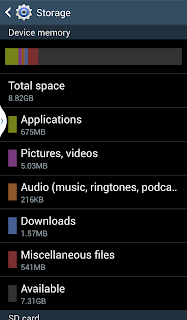 Storage: I wanted to highlight Galaxy S4 storage specially due to limited space that would be available to customers right out of the box, even before you get started with your app and game downloads on the phone memory, on a 16GB phone you would be getting only 8.82GB of free space, the rest is being used up by stock apps that come preloaded on the phone and some for system based files as communicated by Samsung, adding misery to this issue is Jelly Bean OS restriction on moving apps or game to SD card.

So even getting a high memory capacity micro SD card is not going to help much if you download a lot of games and apps on your phone, which is not the case with HTC one at least, though it comes without expandable memory slot it still leaves around 25GB free space on a 32GB Phone.

Concluding Observation: Galaxy S4 definitely scores high on the hardware specs with as the benchmark scores from this phone are way ahead of iPhone 5, S3 and Galaxy Note 2 numbers by a big margin, combine this with Full HD display with addition of nifty software features. Where it disappoints is on overall design and phone memory issue.

If you are using Galaxy S2, Galaxy Note or any other Android smart phone with a plan to upgrade; S4 is worth your money, Please do check HTC One as well because it is an impressive offering from HTC from what I have being reading and hearing about this phone, for now these two Android phones are the best to choose from. Sony Xperia Z also managed to generate some initial buzz however it is struggling to keep up with the sales post release.

Samsung would have to innovative on design with the next Galaxy flagship phone as they have themselves overcrowded the entire galaxy series with plethora of phone models which all look identical reducing the overall uniqueness of any new offering in this series.

Do you think Galaxy S4 would be able to maintain a lead by the end of this year in the smart phone race, or HTC one would prove to be a formidable competition this time around, leave your comments. 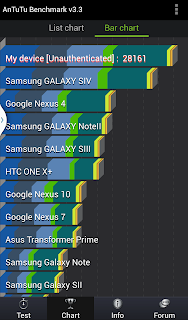 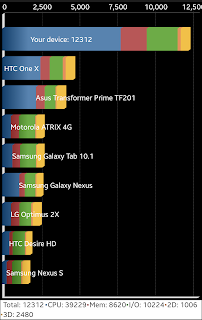 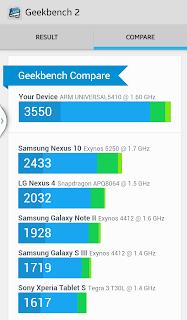 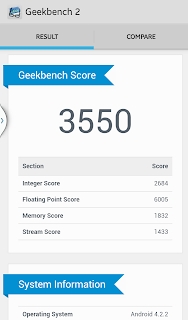 DPreview.com has conducted a super shootout camera comparison between Samsung Galaxy S4 vs HTC One vs Apple iPhone 5 vs Nokia Lumia 920, link here

Posted by KreativeGeek at 4:26 PM No comments: