My dilemma of Diwali gadget shopping was swinging between Xbox One, a little wait for Nexus 6 phone or the new Nexus tablet and Nvidia Shield Tablet which was my first choice however it went on a back burner as there was no news on when this product would be announced for India. It was time to evaluate these options to zero in on the final gadget.

Xbox One: - Promising product, high possibility of entry cost getting reduced slightly in coming months however Xbox One games are simply not worth spending extra bucks for high-end graphics and with Batman Arkham Knight getting pushed over to 2015, it became easier for me to stick with my Xbox 360 this year.

Nexus 6: - Looking at rumoured configuration and screen size it sounds like an interesting upgrade however my Nexus 5 is fit for my current usage with no complaints and it is ensured to receive Android 'L' (5.0) OS upgrade.

New Nexus Tablet: This one was a tough call as my Nexus 7 (2012) hardware seems to be struggling with graphic intensive games after the Android 4.4 KitKat OS upgrade, going by rumours again there were speculations about Asus or LG to be in fray for manufacturing this new tablet, recently it was confirmed that HTC would be manufacturing new Nexus tablet equipped with Nvidia Tegra K1 processor having 9 inch screen. Tegra K1 64-bit processor got my attention however I was not keen to have a tablet with a big screen. 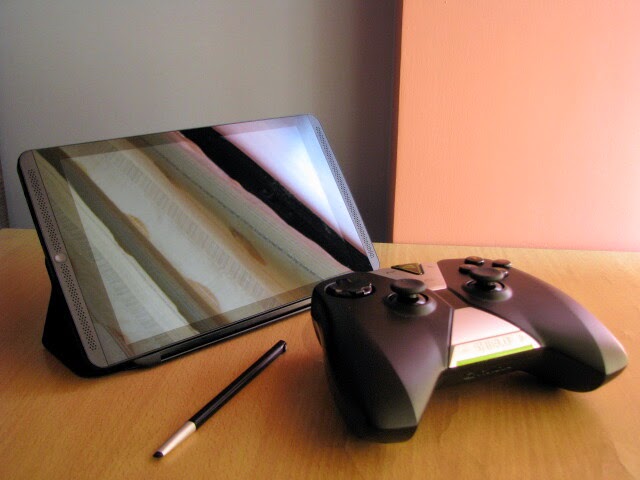 Nvidia Shield Tablet: I was still in two minds pondering over the cost of importing this tablet from Amazon US against discount offer available for Xbox One on Amazon India portal. I usually spend few hours during weekend playing games on my Xbox 360 and it would be the same with Xbox One too however when I thought of a tablet upgrade with option like Shield it offered a better value proposition as a media consumption device, enough juice to handle high end games with ability to play in console mode on TV and equipped with stylus which is useful for occasional image edits when needed.

Since the deciding factor was gaming it all boiled down to portability and recurring cost of games where Nvidia Shield Tablet became a clear option to go with.I ordered Shield tablet and the game controller which is a must have accessory to justify gaming prowess available onboard, also added the Shield tablet cover as well. To avoid any shipping delay and customs hassle I went with Amazon Global Priority shipping option that delivered this tablet in 5 days via DHL.

I was aware that Shield Tablet's 32 GB LTE version had got launched recently unfortunately it was not available for shipping outside US from Amazon, So I finalized 16GB Wi-Fi version knowing that It would not accommodate all premium android games and transferring game files to SD card is also not possible in case of many popular titles. 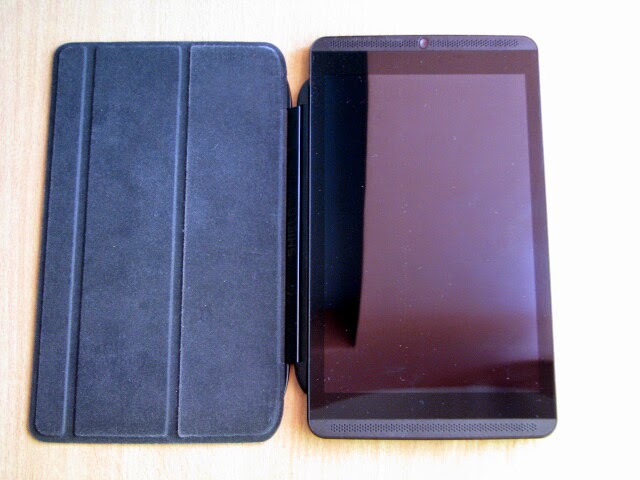 Form Factor: At 9.2mm body thickness, 8.8 inches in height and 390 gm on weight Shield Tablet is not exactly sleek and light compared to other popular tablets, however the 8 inch IPS HD display offers crisp viewing at 1920x1200 resolution with 283 PPI. Bezel area occupies less real estate around the screen which is good, clamshell body design feels sturdy however plastic rim around tablet body feels little pointed and edgy. Top section of this tablet has a mini HDMI and charging port with 3.5 mm slot for headphone connection.

Holding tablet in portrait or landscape mode feels comfortable however you would feel it heavy after some time if you are holding it with one hand. Matte touch to the rear section of the tablet offers stable grip, Right side of the tablet has power button and a volume rocker which are little awkward to operate as if they are pushed deep inside the tablet frame, you also have a MicroSD slot available to add memory card with a capacity of up to 128 GB.

Software & Stylus: Best thing about Nvidia Shield tablet is that it comes with almost stock android OS with no unnecessary OS skin coating and bloatware apps form the manufacturer. In fact Shield Hub app is the best place to look for all relevant and popular games with latest news and updates about Nvidia, Tegra Processor and Shield platform. You can access all your installed android games from My Android Games section and browse through media content on tablet via My Media apps section on Shield Hub.

This tablet also supports PC Gamestream which I am not covering in my review as I do not have the required PC gaming set up required to use this service.When you remove stylus from the tablet it enables an on screen pop up Nvidia DirectStylus Launcher from where you can open apps like Nvidia Dabbler (painting app), Write, Evernote and JusWrite that come pre-installed on the tablet. Shield tablet's stylus is not an active digitizer like the one available with Galaxy Note series.

It is a passive stylus powered by Nvidia’s DirectStylus 2 technology which provides lag free experience for note-taking and sketching supported by palm rejection feature available in most of the apps enabled for stylus use, surprisingly I could use my fingers as well to paint within the Dabbler app while the stylus mode was on. 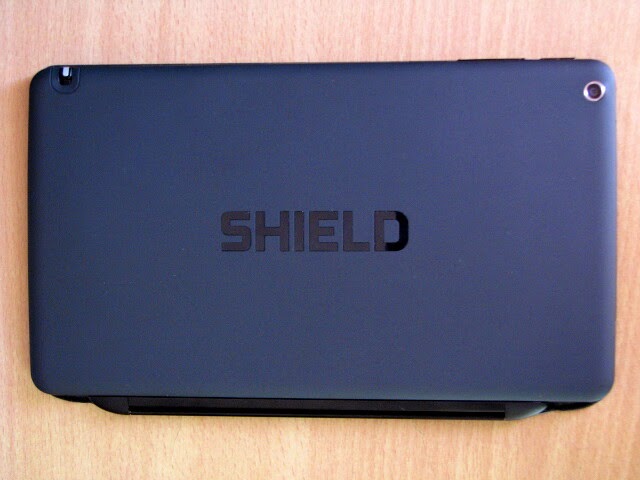 Gaming: After completing initial tablet set up, usable space left out of 16GB internal memory is 11.92GB. I noticed the sheer smoothness and speed while accessing apps, games and browsing however you would still manage to spot an occasional stutter while scrolling inside apps menu. There are options within settings menu to optimize processing and power consumption of the tablet which should help you tweak it to your requirement.

I connected tablet with mini HDMI cable to my LED and you get on screen option to select mirroring mode or console mode, after switching to console mode I noticed that the output from tablet display looked a little stretched out and to correct this I had to opt for "just scan" option from picture settings menu on my LG LED which helped.

I was left in awe by the flawless and lag free controller based gaming experience while testing games like FIFA 14, Dead Trigger 2, NFS Most Wanted and Modern Combat 5. You can create custom gamepad mapping profiles with Gamepad Mapper and share them with friends for many popular games available from Google Play store. It opens up a whole new possibility of making games compatible for controller and to be enjoyed on a big screen.

Using Shield controller feels little clunky in comparison to Xbox 360 controller however the controller layout is good and tactile feedback is very responsive, this controller has a separate charging port and a slot to connect headset too which is a great option for streaming wireless audio if you don't want to disturb anyone in the house and watch videos, songs etc as well. There's a mic also somewhere on the controller which I read on the manual, not tested it yet.

Once I was done playing games and testing other stuff on the tablet for almost 2 hours while connected to TV, I touched the rear section of the tablet after disconnecting expecting to feel some heat surprisingly it was not, which goes to show that heat dissipation is much better, making this tablet well suited for extended gaming sessions.

Other Gaming Features: Nvidia also has a GRID Beta app for cloud gaming with 18 titles free to play for now, Initially I thought this service may not work in India as the servers for this service are based out of San Jose in California and it requires 10MBps internet connection with 40ms ping response, I still tried testing it on my 8MBps connection while it ran some initial tests and threw up a message of non availability of service for your region, when I tried running Borderlands game it was too slow and laggy after the introductory cut scenes ended , then I tried Street Fighter game which ran smoothly with no trouble at all.

Cloud gaming service like this has a chance to thrive, however personally I feel market for this service is in India at least is like a farfetched dream currently. Shield Tablet also has Shadowplay feature that enables you to record your game play with Twitch service (haven't tried this one yet).

Battery Backup: With a gaming device of this processing capability do not expect more than 6-7 hours of battery backup which includes a decent mix of gaming, web browsing and watching videos. I am still testing average battery backup time with different usage scenarios to arrive at a practical figure.

Overall Impression: I was always on a watch out for gaming accessories for android devices all this while with options like MOGA controller, OUYA and many more most of them had flaws which were hard to overlook while weighing benefits and again these products also never entered Indian markets officially.

Two great devices launched by Google last week (Nexus 6 Phone and Nexus 9 Tablet) mark a significant shift in overall specs, build quality and pricing for Nexus line up, I am content with my decision to go for Shield tablet as it offers a good mix of powerful hardware with portable design factor and a big plus on gaming capability, I would have had to invest on the new nexus player separately any ways if I had decided to go with any one of the new nexus device.

Nvidia Shield tablet is undoubtedly a treat for gamers and if you are looking for a standalone android tablet you now have option to go for Nexus 9 as well. I have read reports of iPad Air 2 overtaking supremacy of Tegra K1 platform in recent benchmark tests conducted however Apple still cannot package an all rounder like Shield tablet to lure tablet buyers into a compelling upgrade.

Posted by KreativeGeek at 3:22 PM No comments: