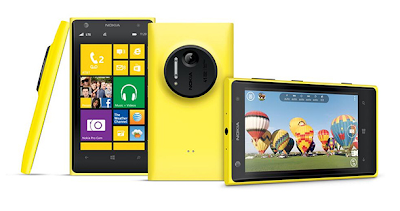 Introduction:
Nokia seems to have gotten its act together with the launch of some exciting new phones in the Lumia series. No phone however, has been responsible for the kind of market buzz as the new Lumia 1020. With a jaw-dropping 41MP camera, the phone raised a lot of eyebrows and it finally makes its way to Indian shores in the last week of October.

Design:
The Nokia Lumia 1020 looks no different to some of the other phones in the ‘Lumia’ series from the front. The 4.5 inch screen is scratch resistant and is surrounded by a plastic body. This is available in several colours including yellow, black and white. The 41MP camera on the back protrudes out of the phone and hence the phone does not lie flat against a surface.
All the buttons are to the side of the phone as the plastic polycarbonate makes for a great grip – the phone feels phenomenal to hold in the hands. 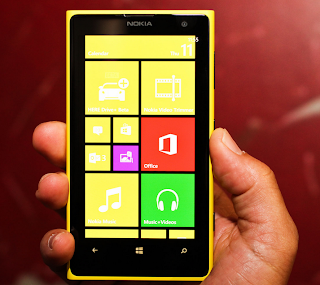 Technical Features:
The Nokia Lumia 1020 is built around the 1.5GHz dual-core Qualcomm Snapdragon S4 SoC — the same as used in the Lumia 920 and 820; but the Lumia 1020 received an upgraded 2GB of RAM.

There's a generous 32GB of internal storage as well as 7GB of free SkyDrive storage. There’s no option to add a micro SD card so the 32GB in the phone is all you get.

This is a top-end handset with a full set of connectivity options, including dual-band Wi-Fi (802.11a/b/g/n), Bluetooth (3.0), pentaband LTE (100Mbps down, 50Mbps up) and NFC. However we expected better from the device's 2,000mAh battery which struggled to keep it going for 24 hours — particularly when we made use of the camera's Xenon flash. 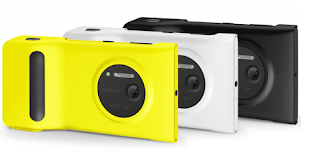 Camera:
Nokia first unveiled the technology that now graces the 1020 in its 808 Pureview in July last year. At the time it was hailed as spectacular, but a dead end, as it was part of the Finnish company's final Symbian phone.

The camera's 41-megapixel sensor is undoubtedly the Lumia 1020's major selling point. Those 41 megapixels aren't, of course, the full story. Other camera features include image stabilisation and 3x (digital) zoom, ISO settings between 100 and 4000, and shutter speeds between 1/16,000 of a second to 4 seconds.

When you take a photo, two images are captured. One is a 5-megapixel version that you can share by email, drop into your SkyDrive allowance or view on the handset. The other is a 34-megapixel image that you can't access until you connect the handset to a computer, at which point it can be copied or moved onto your hard drive. Both images are linked on the handset so that deleting the one you're viewing deletes the other.

Nokia makes a Camera Grip accessory which increases the handset size considerably, but is intended to help you keep a steady hand while shooting. It incorporates a second (1,020mAh) battery and a power level indicator, and also has a universal tripod connector.

Conclusion:
In our opinion, this is a great phone offering several unique features. The sterling camera coupled with the fresh Windows 8 operating system make the Lumia 1020 a great device for people looking for a great phone and a camera to boot. The Windows 8 app base keeps growing daily and is not as unfashionable as it once was.

Posted by KreativeGeek at 11:51 PM No comments: