IT Park in the Wild Wild West 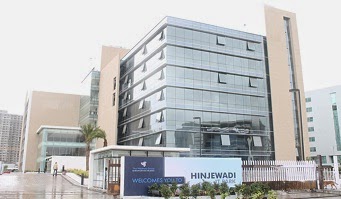 Recent murder of a Infosys employee in Marunji area of Hinjewadi is addition to growing list of crimes causing concern amongst employees about their safety and security. I have being commuting for work at Hinjewadi for past 4 years now witnessing unprecedented property construction in progress changing landscape of this green belt once occupied by farmers.

Pune has two major SEZ locations where IT companies have thrived and most of these companies moved out of their STPI infrastructure from city to Magarpatta SEZ and at Hinjewadi. If you happen to visit Magarpatta you would notice presence of major utility and recreation facilities and as an SEZ location it has blended into the city easily, which is not the case with Hinjewadi.

IT park at Hinjewadi is nested between vasti's (small sections of a big village ward), all the shiny glass buildings that reflect heavy investment made by companies and real estate companies fighting out to occupy every piece of  farmland to sell dreams and luxury lifestyle to the workforce coming to work here. Concept of work life balance sprung rapid development for areas nearby like Aundh, Baner, Pimple Saudagar,Balewadi and Wakad.

When any location witnesses such rapid development it is bound to attract vultures in form of anti social elements, If you stay in any posh society at Hinjewadi today with your family there is nothing available within the IT park in form of a major grocery outlet, no malls, virtually non existent recreation centres. Only a barrage of business hotels and few restaurants. So you have to venture out quite a distance outside IT park to get a feel of the city.

Homes of working couples and bachelors staying in Hinjewadi and nearby areas have become easy target for robbers and passengers hitching rides at Wakad junction for traveling to Mumbai who fall prey to private vehicles which pose a major risk to their safety. When you enter Hinjewadi right at the exit of Wakad bridge you would notice different rules set into motion.Villagers come driving at you in opposite direction all times, road divider at end of Wakad bridge always stays dismantled used by locals to make their own U-Turn blocking traffic most of the time.

You enter in a zone filled with hoardings of property projects and boards with birthday messages for influential people of the local community, there are yearly festivals celebrated by local communities in Hinjewadi which force IT companies to give half day to employees sometimes, alter company transport timings. If you take a left turn from Dange chowk and go ahead of Persistent, taking another turn near TCS office this road would lead you to actual village vasti's behind and gram panchayat here is quiet modern with some political bigwigs who are staunch loyalists of NCP bastion.

This makes you realise that people here are not receptive to development that has happened at a fast pace over past few years and gram panchayat's are opposing move of PCMC to include Hinjewadi under their taxation umbrella since local bigwigs would lose control of power they have enjoyed all these years. I have heard stories of locals ganging up to corporates to employ their people for security, awarding catering contracts and allowing entry to their transport fleet when they had set up shop here, This was bound to happen and there are some strong groups within Hinjewadi who have monopoly in vehicle fleet they have deployed for many IT companies.

Employment prospects for locals got limited to certain section in these companies and farmers who have sold land here made good money probably settled elsewhere however staff working on these farms earlier have found it difficult to make it big out of the SEZ dream and when they see high rise apartments coming up on their own lands, car traffic moving like glittering display of wealth before their eyes.

Feeling of disparity and inequality fuels aggression and a feeling of hatred for the same IT workforce coming to work here. It is like two parallel universes are existing in close proximity of each other and when they collide there is collateral damage in the form of danger to civilian safety.I have seen guys leering at women in cars, or those who cover up their face while riding bikes overtaking them for fun and passing lewd comments. Pune does not have problem of poor migrant population influx that got concentrated in slums like Mumbai, it's reverse syndrome here with well to do families from different parts of the country settling in here and contributing to the mad property rush which has ruffled locals a lot and they see it as an invasion on their culture, lifestyle and a feeling of employment opportunities being snatched away from them.

Quoting example of a big township project coming up at Mahalunge area closer to Balewadi, a single lane kuccha road goes to this location with villages on the way, I passed through staring eyes of local boys spread across this road twice, if they want to block you only escape route is to drive your car through the farms on both sides of the road, this project is so far away from main road forget getting any help at night if someone mugs you up or kills you. I would never buy a house at such location even if it is dirt cheap as builders promise luxury living and high class amenities but these are of no use if your life is at stake while moving in and out of your dream house.

PMC or PCMC has no concrete plan in place to improve infrastructure for commuters working in IT companies, read about a future rail network in pipeline for connecting Hinjewadi to other parts of the city, however it is very likely to get caught in delays as the infamous BRTS project that has drained enough world bank money meant for urban transport improvement. In this situation Police force would be burdened to the maximum in controlling traffic and crime in this area. Car traffic is growing out of control with new phases coming up in Hinjewadi as exit and entry points are limited.

Pune city is considered to be safe in general in terms of crime rate and safety for woman however when majority population of city's workforce works at these SEZ locations, there is a lot at stake and only solution is to moderate growth at Hinjewadi for a while and concentrate efforts to improve infrastructure, public transport else this section of the city would stay as the Wild Wild West zone nurturing crime under the false notion of development.

Posted by KreativeGeek at 12:30 PM No comments: