Posted by KreativeGeek at 2:49 PM No comments: 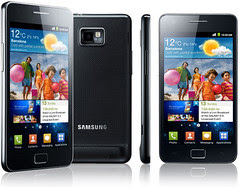 Here’s my review for Samsung Galaxy SII after using it almost above a month now, let’s find out if this new flagship phone from Samsung is a worthy contender to be amongst the best smart phone launches in year 2011

Content/Packaging: Almost all phone manufacturers have resorted to smart packaging, getting eco conscious and doing away with a thick manual booklet, unwanted CD’s etc, Galaxy SII packaging is no exception to this. Along with the phone you get a standard charger, USB data cable, Samsung headphones which I haven’t tried out yet they also come with spare headphone ear bud attachments, a KIES software mini CD, Black leather pouch and finally a 1650mAh battery.

Hardware and Design: A prominent wow factor that catches your attention while holding this phone is its 4.3” Super AMOLED Plus screen and weighing 116 grams it is way lighter than Nokia N8 I have used prior to owning this handset. With a minimalistic design Galaxy SII sports a touch interface based menu and back buttons, you’ve got a home screen button and on the sides you have volume keys with power on/off, lock button. Surprisingly Samsung has not included a button on the phone for camera.

Gorilla glass looks durable and I suppose it can resist minor scratches and smudges in general. The rear cover provided with the phone is made up of flexible plastic material which has a matte finish and though it has got a scaly look to it, it does not help in getting a firm grip. A Word of caution for slippery palms, please get a case as soon as possible to avoid any damage to your spanking new phone accidentally.

The overall design of the phone does not spell class instantly, what amazed me was the slim factor for a powerhouse phone like this one, weighing just at 116 grams against N8 I used earlier which I thought could be the least smartphones could get slim which weighs 135 grams.

Samsung has refined gyroscope function in the phone which I feel is slightly better in terms of response even compared to Ipad 2, adding option of motion based gesture control. Swiping through phone menu, home screens, working across multiple applications happens in a jiffy which goes to show what amount of processing power is really packed with 1.2 GHz dual core processor under its hood. I found Galaxy S2 offering ample features to customize the way you control power settings, using various applications which leaves a lot to be explored while using the phone. Videos look vivid and crispier and I have played some 720p HD videos which look amazing on the SuperAMOLED plus screen. I found the onscreen keyboard slightly difficult to operate while holding the handset vertically, on horizontal orientation it felt laid out properly and easy to use while composing text.

Using phone for navigation via Google Maps it latched on to GPS signal in no time and got my accurate position displayed on the screen, no difference in performance while using it over Wi-Fi or 3G connectivity. Flash support on the default Android browser comes with smooth integration and it just couldn’t get any better. It also allows you to view flash content on websites on demand in case you want to do away with flashing ads on a webpage and just focus on the content

Samsung Galaxy SII supports 1080p HD video recording at 30 fps, I have tried recording videos at 720p resolution (1280 x 720) which did not turn out to be jerky and 8 mega pixel camera captures images with different settings provided in the phone and I found camera performance satisfying enough for my experience moving away from N8’s 12 mega pixel Carl Zeiss lens. You can juggle between image capture pre-sets or define your own settings to click images.

I have not yet tested camera performance in low light settings yet however have tried macro, landscape and normal mode pics with some fiddling with outdoor visibility and auto contrast features. Digital zoom up to 2X does not land up in grainy images but 4X zoom does impact image quality and it would be better to resort to manual ISO settings to check the quality on pictures taken with digital zoom. Front end 2 mega pixel camera is suitable for video calling, not useful enough to snap pics.Stock music player on this phone offers equalizer pre-sets and custom settings with 5.1 surround feature that does not work well on all genre of music, still the default music player along with radio deliver decent performance. 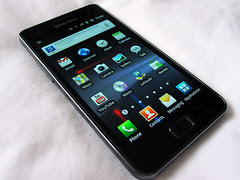 With all major features covered for the phone a note on some issues that surround the current version of Android Gingerbread OS 2.3.3 are mainly battery backup problem which even I encountered during first few days of using this phone.

Using apps like Juice Defender and getting the settings right for your phone display, Wi-Fi settings, Background data sync and 3G usage would make a lot of difference and I have seen improvement from 7-8 hours of battery backup improving to almost a day now on medium to heavy usage. As a blogger and social media enthusiast this phone is a boon for people like me as it provides you sharing options from browser, from various other apps falling into social media category and abundant options to play around with themes, widgets and screen customization features.

It does not stop there, Samsung has also provided Social, Game and Reader’s hub that aim to integrate your experience with regards to configuring twitter/Facebook notifications, listing popular news feeds, subscribing to magazine and book reading subscription based services from Kobo and Zinio and for Game downloads you would spot Game loft games available to try and buy.

Phone body tends to heat up around camera area for weird reasons at times you can keep a watch on battery stats through few free apps available to download from android market, Android marketplace is brimming with lots of apps available in different categories still it has a long way to go in meeting standards set by apple for their app store, the issue being around governance of the quality of apps that get launched on the marketplace, a technically not so savvy user can get confused checking if the app is really compatible with his/her android phone OS and device.

Samsung Galaxy SII has already crossed 5 million units in sales even before hitting US market and poses a good challenge to iPhone 5 which is about to release somewhere in Sept/Oct this year in USA. Android OS needs serious tweaks and bug rectifications in the upcoming Gingerbread 2.3.4 OS version that should address battery and heating issues to some extent and truly the phone has a galaxy of features you would have not imagined in a smartphone before.

Posted by KreativeGeek at 2:16 AM No comments:

Losing 2nd test to England badly, I was surprised TOI writing off Indian team as a non deserving team for top spot in test rankings.

We raised toast to the same team on winning world cup, should we with play always charged bots thay would never fail instead of human players?

Possibly this series could be taken up as a learning lesson to re-look our bench strength of players which managed to grab success in west indies but struggling in england.

Now is the right time to experiment and fail which would help us prepare a new breed of quality players.

Posted by KreativeGeek at 1:49 PM No comments: