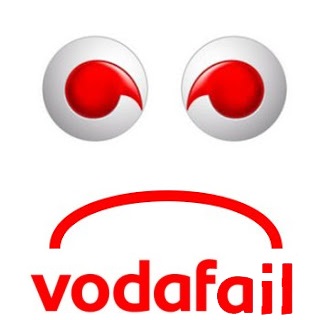 Vodafone amazed me with their swift resolution service recently, best part is they send you an SMS about this gaffe, here's an insight into my recent ordeal with their so called customer service.

I used to encounter poor connectivity problem at my residence from 1.5 years, not very frequent so I could live with it, off late in the past 6 to 7 months I noticed network issues going from bad to worse. Initially the problem was only in one bedroom of the house, now the situation has reached to a point where I move around in the house searching for a random spot where I can hear the opposite person calling clearly and be glued to that spot until the call get's over.

I started missing calls also a lot of times even with full network on 2G mode on the phone, calling person would hear a message about my phone being switched off, calls started going blank while in progress, voice scrambling issues etc. I cannot even think of using 3G service on my phone unless I am sitting right in some sweet spot corner of the house where Vodafone network feels happy to reach my phone.

Unfortunately I have total 4 Vodafone connections between me and my wife, 2 personal numbers and 2 blackberry connections issued by our companies. So their service issues have impacted my dependency on their useless network with regards to my availability on phone while I am home, Same issues that I face when I dial into conference calls from home.

I decided to pursue my network problem actively with their customer care so towards end of Feb'13 I tried calling their customer care helpline 111 as I intended to speak about 3G plans as well, I heard out all options on the IVR surprised to find out there was no option to reach directly to a customer care executive as I wanted to downgrade my 3G plan, their IVR kept playing recorded message for sending SMS keywords to subscribe to various plans, you cannot reach a customer care directly even by pressing 0 or 9 which is the case with most other customer service helplines

I then wrote to their corporate customer care id corpcare.mah@vodafone.com on 23rd February 2013 and received response on 26th February 2013 in the form of a email template seeking info points related to network issues, It was my fault I did not document their pathetic customer service's foul play in year 2012 when they had registered my complaint on a general service feedback call, a network engineer had called me sometime during July-August last year promising to visit my residence to check the network issue but that visit never happened and I did not pull them up for this issue.

When I replied to email dated 26th Feb, I also mentioned absence of option to speak to a customer service representative directly on IVR in my email which was not even acknowledged, I was given options to downgrade 3G plans with plan info and an advisory to note impact of mid-cycle changes to the 3G plan charging on the bill. Which goes to show absent minded reps who keep replying to customers with a set of email templates and do not actually note what he/she has written in the email.

Any ways  keeping the focus on network issue here, my email exchange with corporate care email Id continued in the month of Mar'13, I was not expecting my issues to get resolved overnight however I noticed they raise complaint tickets and close them at their will without calling the customer or sending an email on what resolution was provided on that complaint number?, best part is that they enrage you further by sending an SMS that your XYZ complaint number has being closed as per your feedback.

My wife also got calls from customer care confirming that her network issue is being lodged and later even she got SMS confirmation of complaint closure as per her feedback. How can I confirm closure if no one has even bothered to call back or ask if there was any improvement in the network service. 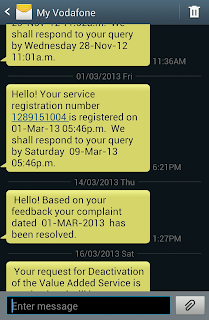 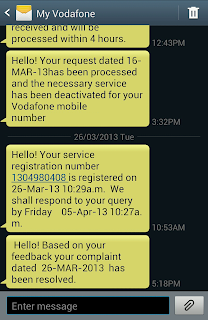 On 1st March customer care emailed with complaint number confirmation 1289151004 and expected turn around time quoted in email was 4th March, whereas SMS states 9th March 2013, got SMS confirmation on 14th March that my complaint has being resolved as per my feedback, checked with my wife to be sure if anyone had spoken to her, she confirmed not receiving any call asking about the network issue.

I sent an email to corporate customer care email id again on 14th March 2013, no response so again on 16th March I raised this issue of complaint closure without calling customer to confirm on Vodafone's twitter ID @VodafoneIN on which some guy called me in the evening and stated he is again forwarding my complaint to concerned team for resolution and I would get a response "very soon"

The "Very Soon" moment arrived on 22nd March 2013, with an email with same template for gathering network issue related information again which I had replied on 27th Feb 2013, that goes to show what kind of intelligent customer care Vodafone has in India, why does a customer require to provide same information he has provided on a previous complaint, you should be able to track that down from my previous complaint number.

On 26th March I get another email with new complaint numbers now - 1304980408, 1304981172 this time they are prompt enough to close the complaint on the same date from the second screenshot above they raised and closed my issue on the same date as per my feedback again, wonderful. My wife also gets a confirmation on her number the same day.

Until now their network team is still investigating my issue and from 27th Feb 2013 to this date I received only one call about my issue only when I raised this issue on their twitter ID which was again a pacifier call to raise another complaint number with no response on what happened to my previous complaint and what prompted them to close it without my confirmation. 26th March email states that my issue would be attended by 5th April 2013, but I have given up on my patience and no longer want to play running around the tree game.

What anger's me the most is they have also started spamming my number with an SMS to login to My Vodafone service online to keep my account active, I did login once to check if everything was all right but the messages have not stopped coming in, with the ongoing network issue it feels so irritating that your service provider is spamming you with misleading messages for keeping an online service active which is not my priority right now. 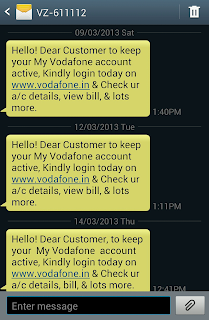 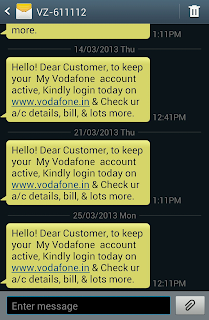 I am going to raise this issue now with their nodal officer's email Id, let's see if they can still wake up from their deep slumber.

I received a call from some new relationship manager assigned on my account by the name Varsha Valsarajan on 1st April 2013 at 1:30 pm from this number 020-71774820, asking feedback on Vodafone service, so irritating this is when you already have a follow up going on to a complaint no one is ready to entertain or return a feedback call.

She again promised a call back and it's being 12 days then, I can take that assurance only as a April Fool's prank, she mentioned checking into the systems that my area has a problem because of which I am facing network issue, she enlightened me with a fact I am aware of since last 1 year. 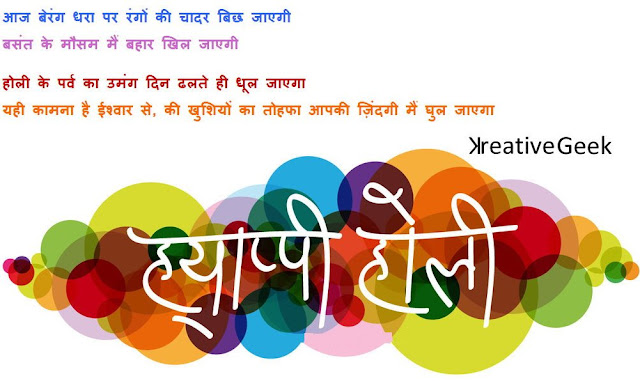 Wish you all a very Happy Holi

Posted by KreativeGeek at 10:04 AM No comments: