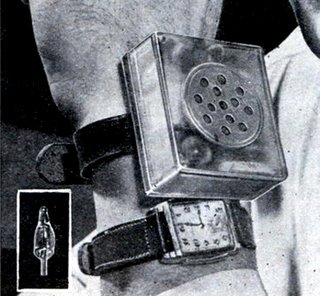 First introduced in 1947, this wrist-watch used a “new miniature radio transceiver being developed by the U. S. Bureau of Standards”, capable of receiving/transmitting short waves while also picking up standard radio broadcasts.

This world’s smallest microtube was made possible by the elimination of bulky wires, which have been replaced by a silver chloride circuit stenciled on a slice of plastic or ceramic material. Developed as a result of co-operative research with industry, the miniature tube has various military applications aside from its use in the wrist-watch radio

Posted by KreativeGeek at 1:19 PM