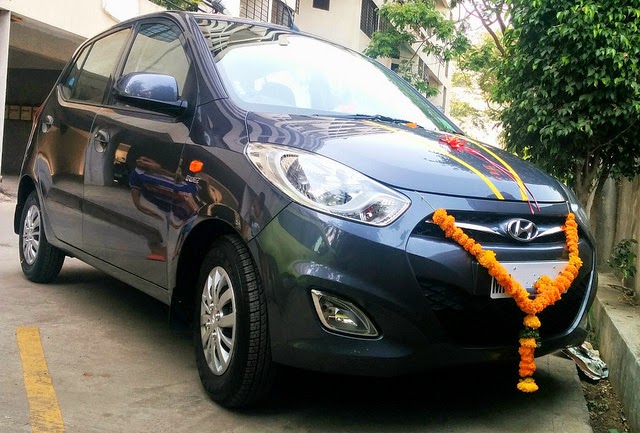 I had plans to buy a hatchback car for my wife this year and she was willing to try her driving skills on Beat but somehow she was always hassled with front dashboard and A-Pillar visibility of this car, We started looking at cars that would suit her driving style and good for 70% city driving and 30% occasional highway trips.

Confused with lot of options available on hand, I had to be mindful of our budget by trying not to exceed it too much and also wanted minimal compromise on interior quality, running cost, fuel economy and resale value of the second car.

Options Shortlisted:
Honda Brio: My wife was keen to test drive Brio, however I was never a fan of Brio’s uninspiring dashboard, front bumper design and extra large visibility on the tailgate door, plus we did not to require additional petrol car powered by 1198cc engine for city driving so I kinda played a spoilsport in cancelling this option for her.

Hyundai EON: We contacted Sanjay Hyundai outlet at Kalyani Nagar for Hyundai EON and Grand i10 test drive, the temptation to go for the Grand i10 diesel version was impulsive, we thought of stretching our budget if needed however bucket seats and front dashboard visibility were an issue again for my wife so had to drop Grand i10 from our probable list. After test driving EON we were disappointed by feeling of low cabin height and cramped leg space with noticeable lag on second and first gear pick-up.

Maruti Celerio: We then started reading through Celerio reviews, and watching TD videos, as exciting the concept of semi automatic gear sounded at the announcement of the car it was dampened with overall styling (both interior and exterior) also looking at overall package offered with Vxi version in Semi Automatic category it did not feel like a VFM offering to us.

We were also skeptical about the semi-automatic gear performance as it was a new offering in the Indian automobile market and this second car would be used by both of us and my driving style in city would have not matched with Celerio, also this car proved to be a runaway hit for Maruti brining good enough waiting period on bookings which was another downer.

Surprisingly we had being overlooking i10 on our list and when all options dried out we decided to take it for a test drive and this time I contacted Kothari Hyundai, Kharadi outlet as our experience with Sanjay Hyundai was disappointing, their staff was just willing to sell a car as fast as possible coaxing us to hurry up on documentation by instigating fear of price rise just to close a deal before month end, not even willing to offer any freebies etc.

My wife took i10 test drive and she found it perfect for her, so finally our car hunt was over, We booked i10 Sportz version and I was impressed by the overall experience at Kothari Hyundai starting with documentation, working out finance arrangements, staff attitude and promptness in dealing with queries right up to Gudi Padwa which we choose as delivery date for our new car.

I did not want to press much on freebies so only opted for mats, mud flap and a reverse parking sensor with LED. We got 3M underbody coating done with paint protection package additionally and opted for extended warranty on the car.

I am writing this review at completion of 1700 kms drive, and car has undergone first free service at Kothari Hyundai Workshop in Kharadi.

Next Gen i10 is what Hyundai calls 2014 IRDE2 version goes to validate continuing popularity of i10 in keeping sales alive even after introduction of very successful Grand i10. 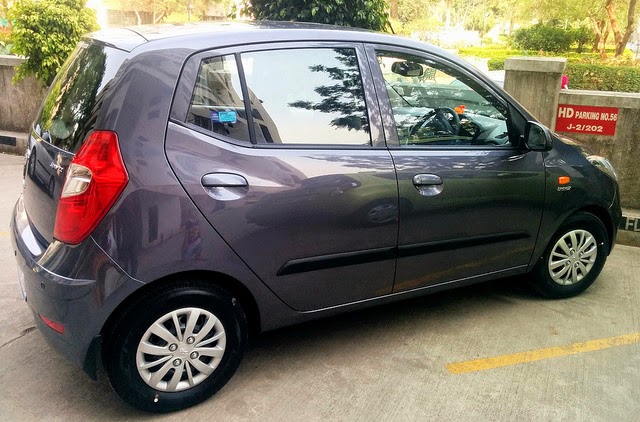 Interior
I liked the black and beige two tone interiors in i10 as it does not produce unnecessary glare on windshield while driving during day, A touch of chrome on door handles and ac vent adds to the premium appeal of i10 interiors.

Hyundai i10 feels less roomy than Chevrolet Beat both in the rear and front section however it has got apt leg and headroom for the driver though to provide a comfy ride. Front seats do not offer very good thigh support, If you push driver seat too behind for getting extra comfort for your legs, rear passenger may experience cramped leg space.

Rear seat can accommodate 3 regular size passengers, not sure if all of them would feel comfortable for long drives. It would be better for 4 passengers max.

OEM Music player: Hyundai i10 Sportz has a 2 Din music player with door fitted speakers; it was a pleasant surprise for an audiophile like me, as I liked audio quality of the music player as it packs just the right amount of bass and thump for your songs while maintaining tone clarity. Shuffling music while driving is little distracting so have to be cautious.

Performance: 4 Cylinder 1086cc IRDE2 engine feels refined and perfected for city driving, you do not feel rear body weight of i10 while driving at all which makes it easy to steer around in city traffic. Steering feedback feels little different at the center while driving at high speed.

Tilt steering feature is useful and gear shift indication is another value add for new drivers, Rear windshield view is little wider as compared to Beat also A-Pillar is not obtrusive which offers good visibility around corners. 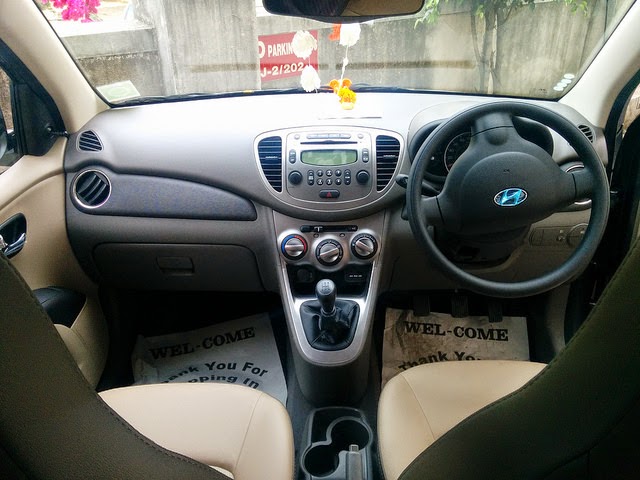 Gear shift: Gear shift is smooth to operate and EPS is very responsive than Chevy Beat

1st Gear: Responds well to pedal acceleration, does not feel sore on engine when you rev it or drive at slow speed.

2nd and 3rd Gear: I liked pick up on 2nd and 3rd gear in this car compared to Chevrolet Beat with no engine knocking at all even when car came almost to a standstill while driving beyond 2nd gear, which means less gear shifts during heavy traffic conditions.

4th and 5th Gear: i10 cruises well in city while driving on 4th and 5th gear; engine response is peppy and smooth. The moment speedometer crosses 80kmph mark and above 2000 rpm engine starts feeling little cranky, need to test it on highway to see how well it performs during high speed driving.

A/C: Pune’s simmering heat does take a toll on aircon, I found cooling inside cabin taking some extra time during afternoon when mercury touches extreme levels as compared Beat’s AC.

i10 scores well on braking, suspension and ground clearance. Only features I would miss in this car would be rear viper and spoiler and the option to get a Bluetooth enabled music system with steering controls.

Exterior styling does not change much in 2014 Hyundai i10, overall design still looks fresh.

Boot Space: 225ltr boot space is good enough for light luggage while on small trips and for regular shopping items while driving in city.

Fuel efficiency: Clocked average of 13.85 kmpl, 12.20 kmpl and 14.24 kmpl on 3 full tank refills, decent to start with. Mileage has improved after first free service, not sure how far car can run when the fuel refill LED starts blinking.

After Sales Service Experience:
Service appointment booking process was easy and I liked upkeep of customer lounge area at their service center, it is a busy place during weekends so better to give car for servicing on weekdays, gives you enough time to explain anything specific you have to highlight to the attendant as he goes around taking notes.

Service attendant also explained what work would be carried out during first free service; allowed enough  time to inspect car post servicing was completed. We were also in for a surprise winning a silver coin in some promotional offer running when we brought the car.

More updates on mileage and A.S.S experience to come ahead.

HTC’s New Flagship – A Preview of the new M8 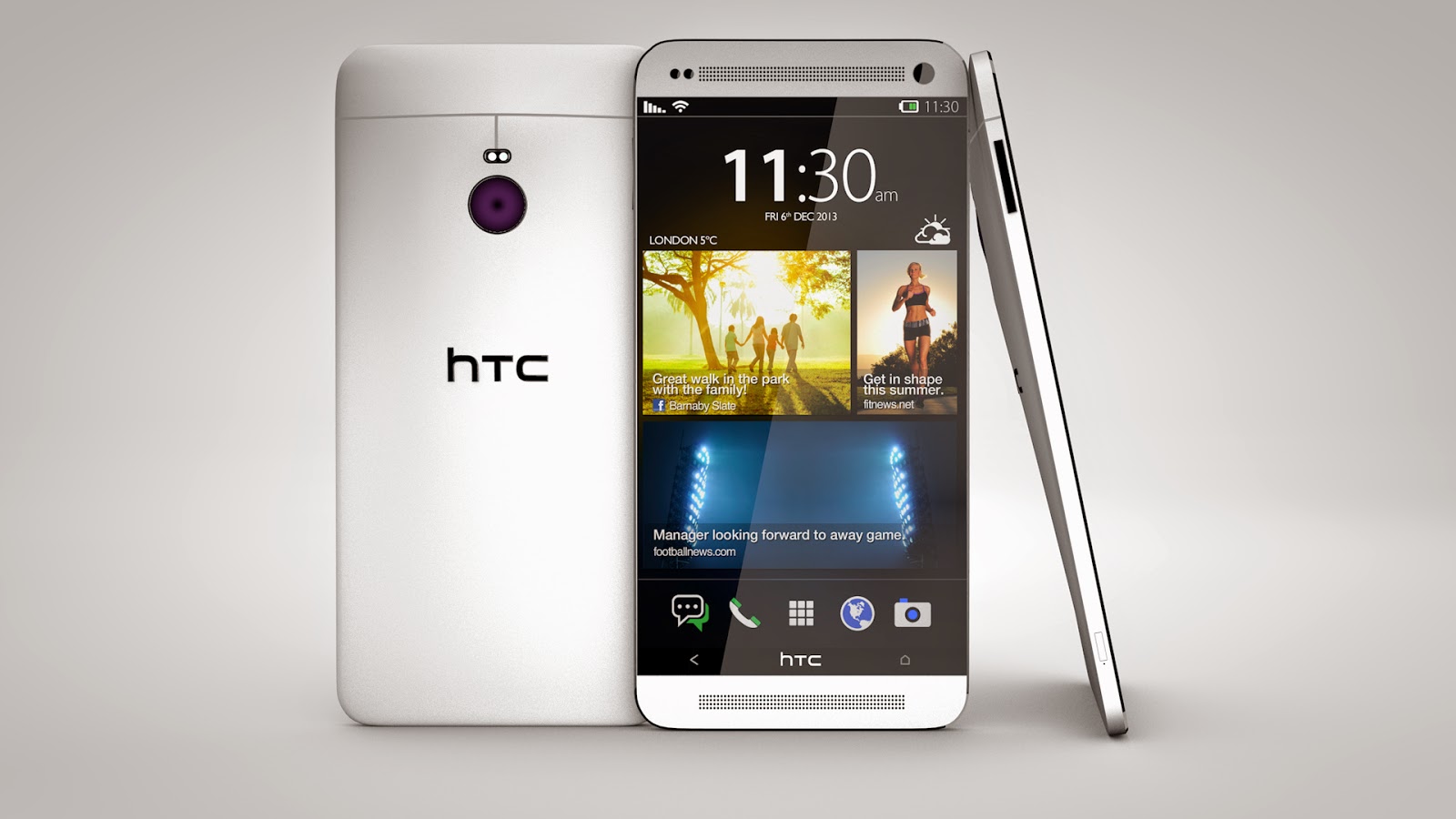 With Samsung launching the S5, the mobile market in India got a new superstar to look up to. Not be left far behind, HTC has come out with a new handset called the ‘M8.’ The new phone from HTC looks really good on paper and we look forward to the launch of yet another awesome mobile.

General Features:
HTC was one of the earliest manufacturers to put out Android phones on a large scale. Looking at the arsenal this phone comes equipped with, it’s no surprise that this is one of the most anticipated handsets in recent times. HTC might have slipped off the radar for most people with Samsung and Apple continuously in the news, but make no mistake about the M8, this phone is a top of the line device.

The phone’s exterior is made of molded metal and it’s quite stunning to look at. With dimensions of 146.36 x 70.60 x 9.35mm, we feel this phone’s size is quite optimum and we’re glad HTC hasn’t succumbed to making phones bigger thereby becoming less comfortable to use.

With a 2.5 GHZ Quad-core Qualcomm Snapdragon 801 processor, 2GB of RAM and 16GB of internal storage, this phone looks like no slouch and with Android 4.2.2 and HTC’s Skin Sense 6.0, you won’t be surprised to find out that tech geeks all over are going gaga over this device.

The rear camera on this phone is an interesting one. HTC says it’s a 4-ultrapixel camera. Dodgy nomenclature aside, we’re really looking forward to trying it out in the real world and see how it performs. No surprises with the front camera though, with a 5MP lens and HTC’s track record in this domain; we expect selfies and video calling to be nothing short of spectacular. 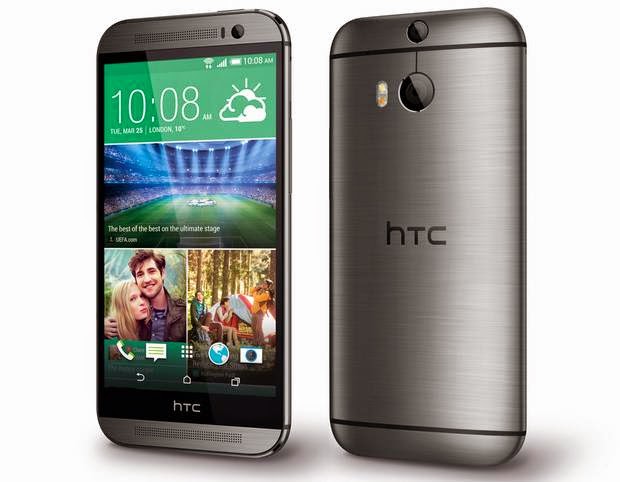 What We Expect:
The phone is going to be launched in India any day now. This phone promises to be something special. To a great extent, it might represent HTC’s resurgence in the Indian market. The features and the composition of the handset indicate that a lot of thought has gone into the making of this phone. We think things in paper look good at the very least and we’re eager to try out the new 4 ultrapixel camera.

Verdict:
The HTC M8 looks like a solid device and HTC seems to have gotten it right this time around. We’ll be reviewing the phone when we get our hands on it. But from what we’ve seen, we like it. 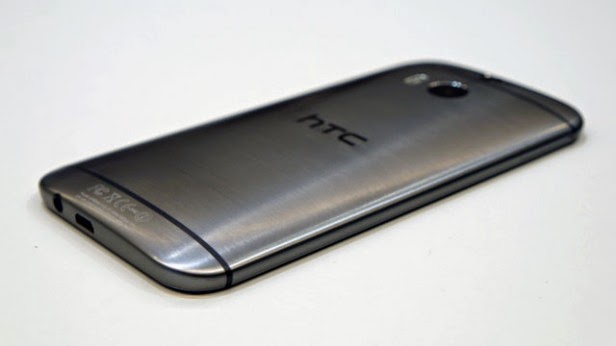 Summary:
It might surprise some to find out that at one point of time, HTC was the brand selling the most Android phones in the world. How things have changed! However, with the new M8 which has a bold new design and some really stellar features, things could be looking up for the Asian manufacturer.

Posted by KreativeGeek at 9:49 PM No comments: