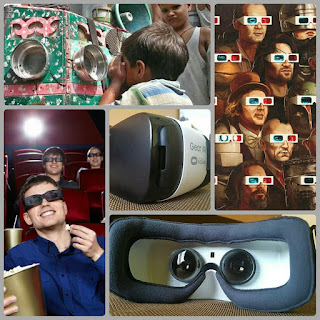 Virtual Reality caught my attention maybe a year back when early Google Cardboard prototypes were officially launched in India, I also noticed a steady rise in the content dedicated to 360 videos on YouTube, however other than the actual Do it Yourselves (DIY) type of cardboard VR boxes there was no actual headset that was available and going by the reviews of other VR devices that were getting launched with Mid-Range phones it did not generate any further curiosity for me personally.

I was also tracking launch of a media wear device by the name ‘Glyph’ manufactured by Avegant primarily for the privacy it had to offer, directly beaming video content on your eye retina to a size of up to 80 inches. I was impressed by the design that cleverly housed decent pair of earphones with the viewer, unfortunately this project took too long to come into existence and as of today it costs around $699, ‘Glyph’ headset does not confirm or claim to have VR capability but when you compare it to getting a free VR device with your flagship mobile phone it is definitely expensive for a standalone gadget.

The Nagging Wait
When I was still reviewing my thoughts to go for Galaxy S7 Edge, the free Gear VR headset offer looked like a sweet deal but it was not the baiting part while going through the purchase. So after receiving S7 Edge, Samsung had set a timeline of 45-60 days for shipping free Gear VR headset to customers who had pre-ordered their new flagship phones. I got my phone on 20th March and the offer to redeem Gear VR code went live on 5th April and from there the headset was delivered to me on 9th May, by this moment the initial excitement of trying Gear VR had faded away from my mind and my phone also encountered heating and screen flickering issue due to which It went in for repair and was given back to me on 19th May so finally it was time to experience the VR tech almost after 2 months of getting the new phone.

Initial Setup
Unboxing and configuring Gear VR is fairly easy as the hardware is entirely made out of plastic and the white color is sure to fade as it would attract smudges and stains over longer period of use. The foam layer strapped around the viewing area touching your head is comforting however it tends to absorb sweat which is not good. If you wear the gear VR headset with a sweaty forehead it would accumulate fog on your viewing lens so keep a micro fiber cloth handy. You get two Velcro straps inside the box, one horizontal and one vertical but the horizontal strap running behind your head should be enough to support the headset with mobile inserted in it. There are two knobs at the both the edges of the headset, one side of these knobs fits into the charging slot of your phone and has position A and B to accommodate Samsung Flagship phones based on their size.

I initially connected my Galaxy S7 Edge to position ‘B’ which was not so ideal for adjusting lens focus, however when you fit S7 Edge on position ‘A’ viewing becomes more comfortable and adjusting focus is easy however the screen door effect (SDE) is prominently visible. It would take very less time in getting accustomed to navigation via touch-pad on the right side of the headset which also has a slot to connect charger at the bottom and houses volume control, a button to go back. Adjusting focus is enabled via a rotary dial on the top middle section of the headset.

You also get a black glossy plastic panel to cover your mobile helpful in preventing any ambient light seeping into VR lenses. If you are not using Gear VR in harsh day time light conditions, this panel can be kept away to let the handset heat up a little less and the weight of this headset is felt on the nose initially however over regular period of use it would not bother you much.

The ‘WOW’ Moment
After following the initial set up guide I explored both Samsung and Oculus store which has a good library of apps to begin with (both paid and free), First thing I tried on the VR headset was the Oculus 360 photos app and I was already in awe and excited like a kid, swaying my head in different directions looking at immersive high resolution photos, next I downloaded Jurassic Park video app and a short Avengers promotion clip which impressed me a lot. I wanted to try the Oculus video app which has different 5 modes to view both online and offline videos. You can connect your Facebook account with the Oculus video app to view online 360 videos you have saved or popular and trending content on Facebook.

You can watch side by side (SBS) format 3D videos too on this VR player and there is a app by the name Milk VR which is available only for the US region on Samsung’s VR store and as a workaround you can download it by installing a free VPN client on your mobile to change your internet access region to US and once the Milk VR app is downloaded you would not need VPN service any further. This app has very good collection of the latest and trending videos which you can download too and the other popular app for searching good VR content is Jaunt VR.

The Oculus video app renders virtual environment exceedingly well and the experience of watching videos on a large virtual screen cannot be put down in words. If you prefer watching your favorite movies or shows lying down on the couch or bed select the void screen mode which has a travel mode option it keeps the screen always in front of you and also allows increasing or decreasing the size of screen to your comfort. You can actually hear the sound from the video playing change direction as you turn your head around. I have played Anshar War 2 and Smash Hit on Gear VR and both these games look awesome to deliver on a VR experience fit enough for a device of this category.

Most downloaded VR video files with 4K resolution would fill up your internal phone memory very fast so to move content on your SD card follow below steps:
You can also visit my YouTube Playlist here, I keep adding interesting VR content on this regularly.

Current Pitfalls
When it comes to watching online streaming content you would need a high speed broadband connection to render 360 degree content seamlessly and I found my 8mbps connection struggling at times to buffer video content and this was also causing the mobile handset to heat up pretty fast, next surprise is absence of a native YouTube app on the Oculus or Samsung VR store which forces you to use inbuilt internet browser that delivers less than pleasing quality of video content while accessing web version of YouTube. Even if you happen to find interesting 360 degree videos for download you have to ensure that the video quality is no less than 4K resolution and anything below that is going to be pixelated.

Playing the free game ‘Smash Hit’ got me nauseatic in short time and I had to take the headset off to prevent any further disorientation. This is where users need to take necessary precaution and avoid wearing this if you feel any fatigue on your eyes or dizziness in your head. Do not wear the VR headset if you are tired or exhausted and most important of all do not forget to blink. The manual rightly advises to take frequent breaks and for me personally I ensure to take it off after 30-40 mins of use.

Is VR technology just a hype?
I remember our school days when we used to study planets in books, today VR technology can actually transport our kid’s right into space which can fuel their curiosity to a new level and achieve a heightened state of learning in an immersive environment where they can actually feel themselves flying around a planet, this potential extends to many other areas beyond learning and media (BTW do not allow kids below age 13 to use Gear VR), I saw two apps on the VR store that help you to deal with the fear of height and public speaking as they place you directly in a virtual world that has cause a mental block for you.

I also watched some videos on Chennai Floods and Nepal Earthquake shot in 360 degrees, it definitely elevates the emotional effect with the sight and sound of destruction and despair that feels so real and imagine a simulation of any natural calamity made available on VR, it could go a long way in training and teaching people what their first response should be in such conditions and how they can ensure their survival in difficult times. There are tourist destinations, places of religious importance in India which can be brought closer to people.

The success of VR technology again depends on consumer adaptation and the way it is put to use by sectors other than entertainment industry, 3D technology did not take off so well after the initial hype but it is not necessary VR would go that way too. Sony has announced arrival of PlayStation VR at this year’s E3 expo, the initial offerings for the console platform look very promising. We also hope other OEM players would come up with advanced portable VR gadgets which would not require the processing power of a PC or a Console and to augment VR capabilities work is also in progress to integrate smell and motion to deliver a life like experience.
When you think of televisions sold these days a lot of these high end models are equipped with 4K display, however mainstream broadcasting media has just graduated to HD and there is limited 4K content that you can watch directly on your television without streaming it from internet. VR experience requires 4K content by default and this is where the cranked up resolution and excellent quality of mobile display combined with pixels per inch (PPI) sharpness are put to good use.

My first personal entertainment device was a Videocon Walky series cassette player purchased in the mid 90’s. The joy of listening to your favorite music by blocking the world around you was something novel in those days when everything else like watching TV, going to movies etc. was done with the family, later in the age of smartphones our mobile screens and tablets became default choice to meet our entertainment needs on the move by merging a host of services that required separate gadgets earlier into one.

I see Gear VR as a decent entry level personal entertainment device to get a customer acquainted with VR technology and also offer an option to enjoy the content they like to watch without disturbing others, imagine the convenience it offers you to watch movies/shows during long flights/train journey. Wearing a Gear VR device in public is obviously going to attract weird and curious stares due to its bulky build, I prefer the design to evolve into something subtle like the LG VR headset.

Samsung has made both smart and a bad move by limiting compatibility of Gear VR to their flagship phone line up, however if you plan to buy one, owning Gear VR headset is a no-brainer as there are few offers in progress which customers can avail to get Gear VR at discounted rate and without any offers spending Rs 7,990 on this headset would require a second thought, If you are only going to use it for only for the novelty factor.