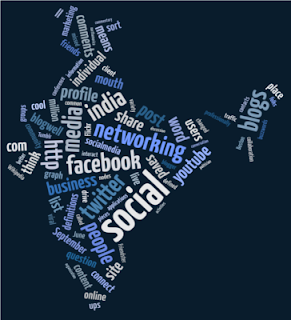 Explosive adoption of Social, Mobile and Digital continues to swell in India which presents some astonishing facts in numbers which show a huge potential for continuous growth.

Some stats to start of with from this article featured on wearesocial.net
Twitter and LinkedIn are also popular amongst Indian netizens, with each claiming more than 15 million users.

YouTube has particular appeal for Indian audiences too, with 20 visitors every single second. Each month, almost 56 million visitors from India consume more than 4 billion videos – 25% of them via mobile devices.

Of all these statistics, what remains to be seen how companies can use this growth to their advantage in order to facilitate the e-commerce transition to compliment their brick and mortar retail business model, given that the urban/rural digital divide still exists in India on a large scale.

Posted by KreativeGeek at 9:27 AM No comments: