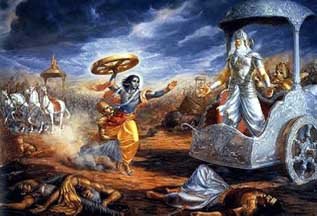 The Epic Waits to come Alive...

We have feasted our eyes and senses in recent times to some very high class and visually stunning Hollywood flicks, I always think if Harry Potter, LOTR (Lord of the rings), The Matrix Trilogy, MIB, I Robot and many more to go, if such movies can enthrall audiences around the world, why can’t Indian cinema attempt creating such fantasies, which become world wide blockbusters.

Krrish has shown the way to experiment and prove film industry that if attempted fantasy movies can be success, if story is sensible enough with other factors important in making a movie balanced.

I always imagine if someone makes a mega budget, grand scale movie on Mahabharata, The movie has to be graphically brilliant as the story of Mahabharata has lot of emotional package to keep the audience glued, there’s lot to experiment, I keep hearing rum ours on various directors and producers planning to take up this project.

Visualize this, a great battlefield, maybe it can be shot in a high altitude plains, sun rising in the background, a war score slowly building up, let Mr. Rehman do the honors for this, he is very good at background scores, a frame showing warriors on their chariots, next a frame on flags of both warring sides fluttering in the wind bowing across the battle field, a silence waiting to end, in a war cry. Next frame, Arjuna’s chariot flag fluttering, Krishna’s peacock feather swaying in the wind on his mukut, Then a conch sound is heard, with a frame capturing a warrior shadow blowing the conch, horses get ready to rage ahead, and then erupts a loud cry of warriors, running towards each other, and as the camera moves towards a warriors chariot, with a bow and arrow in his hand, ready to fire the arrow from his bow, the background score grows to its peak now and as the arrow leaves the bow, then the movie title Mahabharata is shown on a warring background, maybe ISKCON images can be used in the background as used In Mahabharata television series.

What do you think, comment here if you feel our traditional epic is grand enough to be showcased in the best way to the world?