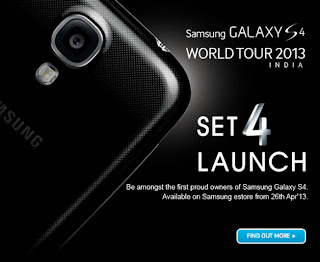 The most awaited smartphone of the year is out.And as we gear up for its launch in India on Saturday, 27th April. Here’s a sneak-peak into what you can expect of the Samsung Galaxy S4.

Screen
With a full HD 1,920 X 1,080 resolution, Super AMOLED display, 441 ppi high pixel density, everything looks sharp and more pleasing to the eyes. The screen can be operated by moving the finger even lightly on the surface. The S4 allows a user to operate some functions on the phone without even touching it. Gorilla Glass 3 is used to make the screen glass.

Design
This device is roughly as wide as S3 having dimensions at 136.6X69.8X7.9mm which makes it 5 mm longer and 1 mm thinner than its predecessor. The thin screen bezel imparts a wonderful look to the phone. It feels like the screen is pouring off the edge. With a thin air gap between the screen and the tough digitizer, the user feels that they are actually touching the screen instead of the glass on the top.

Performance
The phone is powered by an Exynos octo-core processor. With this processor, everything works extremely fast, opening and closing down of apps, browsing web pages, and games work in the blink of an eye. The battery is bigger than most smartphones available today as it has 2,600 mAh. It is efficient to provide power which suffices for all day long.

The 13 megapixel camera works well in low light with Backside Illumination (BSI) sensor along with a flash. The front 2 megapixel camera helps one to do video calling easily and S4 also provides the feature where the images from the front and rear camera can be superimposed.

The flagship smartphone from the kitty of South-Korean conglomerate, Samsung will be released in India on 27th April, 2013. This exclusive launch event organized by Reliance Digital, will be held in Shangrila Hotel in Mumbai. Bollywood heart-throb Ranveer Singh of Band Baajaa Baraat and Ladies Vs Ricky Bahl fame will unveil the device..Apart from being an actor;Ranveer Singh himself is a techno-geek who loves to use the latest devices and is updated about most technology advancements.

Posted by KreativeGeek at 11:43 AM No comments: