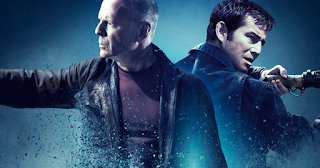 Went to watch Looper with no expectations at all, must say it exceeded all possible one's for a science fiction movie. Thankfully I did not have to forcibly wear 3D glasses for this one to watch this one like other stereoscopic post processing 3D converted movies. Looper is set in the year 2044 in Kansas where Joseph Gordon-Levitt plays a hit man Joe Simmons, who works for a gang that helps clean up mess from the future as assassins their targets are sent to them from year 2074. They work on a contract/code which they are not allowed to break.

Their contract ends in retirement from the gang when they kill their future self and get paid in gold bars instead of silver for the regular killings, Joe is shown to be a junkie who has surrendered to this lifestyle of killing to earn a living, frequenting the bar owned by the boss of his gang, who has being sent from the future to run the looper gang. These assassins surely have a rich lifestyle in a economically ruined futuristic America depicted in the movie. Which takes you to a thought that Joe is already running in a loop living his life like a hamster running on a treadmill.

However life would someday push you off your treadmill and lock you into another loop where you are forced to think how you are going to break a vicious cycle that could continue the way it is, and this is where movie takes a head start when Joe's friend Seth visit's him requesting a place to hide, as he failed to kill his own future self and allowed allowed his loop to run.

Joseph Gordon-Levitt looks more like the Max Payne with his classy Jacket and tie attire in a slick hairstyle while smirking at the table with his boss when he questions him about the whereabouts of Seth, he finally gives up the code of the secret hideout at his apartment under his living room rug, from where Seth is picked up by a wannabe Kid Blue (still learning to handle the long barrel 45-70 caliber pistol) to be executed who kills his future self as well. 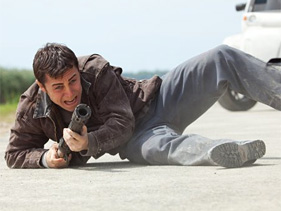 After this incident Joe is confronted by his own future self as his next target, and here comes Bruce Willis who has faster reflexes to avoid getting killed by Joe's blunderbuss shotgun, he becomes that loop on the run which Joe has to close to avoid getting killed by his own gang. As the events move forward you are taken into the parallel story line of Joe's future where he grows up to become Bruce Willis and discover's love of his life quite late, leading a peaceful life somewhere in china, loses his wife to the gangsters of a faceless crime lord "Rainmaker", he decides to get back in the past to hunt this Rainmaker down which gives you a deja vu feeling of Terminator plot.
Movie gather's pace from here and marks entry of Emily Blunt as Sarah protecting his 10 year old kid Cid (Pierce Gagnon), who plays the young Rainmaker strikingly well and gives you the creeps with his performance, Director Rian Johnson's vision of futuristic society in 2044 is far away from what we see in most sci-fi movies, most directors use CGI to build their imagination of future with high rise and slick structures, or depicting wastelands and deterioration over a crumbling ecology. You would see Joe driving through lush green barns and the city scape has a mix of chaotic social set up, with cars running on solar panels and flying bikes driven by loopers.

Joe keeps a hidden stash of silver bars from his killing's at his apartment so you can be rest assured even if all currencies crash, Silver and Gold would never loose their sheen in future as well, you would not get to see much techno glitz, however there is a scene where Bruce Willis is accessing a desktop with a motion controlled interface working with his fingers. Looper stands strong on the story line as a movie and does not rely on CGI or action to back up it's story, after the movie was over i notice there was no background score to the ending credits, still this movie leaves you pondering and I feel karma itself runs in a loop across time to infinity, Looper is definitely one of the best sci-fi movie I have watched in recent times, no spoilers here on my review, go ahead and enjoy this movie on the big screen.

I rate Looper 4/5, let me know your comments on my review and your rating for Looper in case you have watched this movie.

Posted by KreativeGeek at 1:20 PM