An architect James Law has designed floating pool concept for Wadhwa construction group in Mumbai known by the name Aquaria Grande, check out a set of these design pics from this blog

Posted by KreativeGeek at 8:22 PM No comments: Take a look at how some famous comic characters would look life, embracing the real life. links to photo's here

Posted by KreativeGeek at 8:02 PM No comments: Posted by KreativeGeek at 7:20 PM No comments:

I stumbled upon this video on YouTube, which i was not really aware of starring Jennifer Aniston and Mathew Perry, some flashback memories of good old Windows 95. Could look gimmicky by today's standard's maybe they could have used some star power to explain what Windows Vista was all about!

Posted by KreativeGeek at 7:17 PM No comments:

Had just watched Immortal's last weekend, which also revolved as a story around the war between Titan's, I am not too sure how far Hollywood can ride on greek mythology with special effects for repetitive plot and for god's sake stop the 3D gimmick, Avatar has kind of opened the flood gates for the producers to forcibly release movies in 3D format. Trailer looks slick and king size baddies, would Sam Worthington be able to prove his worth on this upcoming flick?
Posted by KreativeGeek at 6:57 PM No comments:

What if... Batman Movies Take a look at some interesting movie poster concepts of Batman movies if made by some famous movie directors, link here (courtesy:geektyrant.com)

Posted by KreativeGeek at 12:06 PM No comments:

Keyboard in your pants Check out these Jeans with a fully functional keyboard, mouse, and speakers integrated within the fabric of the pants. A geeky apparel that may set you back by $400, would you really buy these pants to show off your geekiness?

Read more about this here

Posted by KreativeGeek at 11:58 AM No comments: 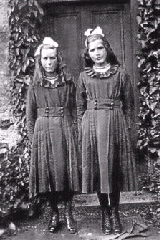 Posted by KreativeGeek at 9:50 AM No comments:

Email ThisBlogThis!Share to TwitterShare to FacebookShare to Pinterest
Labels: interesting

Ghost Rider marks it's return to the silver screen with Nicholas cage reprising his role of Johnny Blaze who is on the run after he discovered the dark passenger within him which came alive post his deal with devil and he still has not figured a way out to escape his curse, he is assigned a task to prevent the devil (Roarke) from transferring his soul to his son whom he conceived through tricking another lady while saving her life by striking a deal, yeah the devil seem's to be more like a some top secret negotiator out to secure deals!

I was slightly confused watching 20th Century Fox, Warner Bros, Marvel Knights and Columbia Pictures clips rolling before the movie began, a lot of production houses jumping into this project it seems, not sure how much each of them would earn out of this one? Nicholas Cage looks tad tired and aged for a kick-ass highway to hell rider character, however he does deliver decent performance as Johnny Blaze.

Movie plot is wafer thin and does not offer much to delve into, it's a journey from the word go and the story keeps adding on to the trip as the movie progresses. Action and Graphics are a plus for the movie, Director Mark Neveldine and Brian Taylor are good at delivering edgy and over the top action flicks, it felt as if this movie canned their potential to deliver something that could have being better, I have watched both versions of Crank movie which tricked me into watching this flick, there are scenes in the movie where the animated ghost rider facial close up's are projected to show the intencity of the character enjoying mayhem, destruction and annihilation, however beyond a certain point the skull on fire looks constipated.

The only part worth discovering in the movie is that The Ghost Rider was once an angel, called Levatoss who was known as the spirit of justice, he was tortured and corrupted in hell by the devil and converted to a Ghost Rider as Spirit with vengance, so towards the closing part of the movie you would see the Ghost Rider blazing away on his bike in blue flames, yeah change of color the angel is out now, but I am very doubtful if this franchise would be coming on big screen very soon again. Action sequences are shot well, camera work is also remarkable, the overall movie felt like a rushed affair. It seems this movie would recover most of it's budget from dvd/blu-ray sales. If you cannot watch this flick, give it a pass and wait for the dvd release as 3D does not any justice to the movie.

Ghost rider return's with lot of smoke but less firepower, my rating 2.5/5 for this movie.

Posted by KreativeGeek at 2:41 AM No comments: