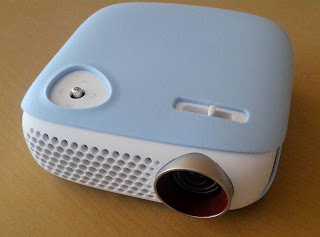 Since the past year I felt the need to go for a second television at home which I had being avoiding all this while and the LG 42 inch LED installed in the living room is sufficient for regular TV viewing and gaming but I needed a larger screen to watch TV series I follow and occasional movies on the weekends. The rate at which LED/OLED TV prices are tumbling a 55 inch LED is close to becoming common choice for TV upgrades for most consumers.

My budget was limited to max Rs.60,000 and when I began searching for options to choose a decent 55 inch LED TV, It presented me choice of extreme options. VU & Videocon do have LED’s of the size I was interested within a range of 50-60K but the quality factor was weighing heavily on the back of my mind and the trouble with brands like LG/Samsung was that they were priced above 100K and most of the LED/OLED TV variants came with SMART/3D functions which I did not require for the 2nd screen.

I began looking out for projectors as well and my research was going too deep into the specifications like short throw/long throw, what type of projector is best suited for home entertainment – LCD/DLP/LED, Full HD etc. In due course I managed to shortlist some projectors based on online reviews, first on the list was Optoma HD141X which is a 3000 Lumens Full HD, 3D projector costing around 70K in India but available for around 50K if ordered from US, the second choice was a BenQ MH680 projector (almost similar config and cost like Optoma) however this one was categorized as business projector. 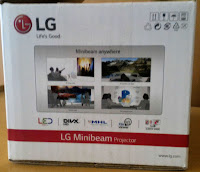 So after spending almost 50-60K on above projectors I would still have to invest in a good projector screen at the minimum and I was not keen to go for permanent wall fixture in any room of the house so my projector search now extended to PICO and portable range. I found interesting option with LG Minibeam series and initially LG PF1500 was on my wish list however it was stretching my budget even if I ordered it from US. I happened to watch YouTube clip showing demo of LG PW800 and the video was projected at a short distance in a small room directly on the wall, I was impressed with the vivid color reproduction and TV like viewing experience. This prompted me to go through user reviews in order to understand the pros and cons.

I had to now figure out which areas in the house projector screen would come into use because I was keen not to undertake any major furniture movements and anticipated 5ft – 7ft viewing distance to the max. When I got my projector for the initial 2-3 days I projected it directly on the walls (Brown/Green painted) and I observed that the image quality was better than expected and I was able to get projection of up to 65 inches easily. On-board speakers are loud enough for a small room and sufficient if you do not need a theater like sound experience. The power adapter cable is apt in length and you would be able to set this projector up and running in no time as operating its functions via remote is also easy, the overall build quality of the remote seems to be too plasticky though. While the projector does get warm during operation however the fan is not too noisy.

I checked the sound output on F&D 2.1 330BT speakers with wired connection to 3.5mm headphone jack on projector. Sound quality was good and it is also based on the quality of video file you are playing. My next goal was to enable Bluetooth sound output for this projector for which I ordered Avantree Saturn Pro transceiver which comes in handy for pairing it with my Boat Rockerz On-Ear Bluetooth Headset and the F&D Speakers wirelessly. Also noticed that when audio is delivered via 3.5mm jack you cannot change through various sound modes available from options menu (Cinema/Sports etc.)

I was also finding it little difficult to get a portable 100 inch diagonal projector screen as most of tripod based screens were for 4:3 ratio and after browsing through lot of options on SnapDeal, PayTM I found a vendor on Amazon India selling an Inlight projector screen with 88”x49” inches dimension, 1.2 gain and 16:9 ratio. The projector screen reached to me within 5 days from dispatch and it was quiet a task in getting it set up for the first time. The quality of screen cloth is not very premium but acceptable for the price it was available for and I may go for a screen upgrade in future so this one works for now as stop gap arrangement.

LG PW800 minibeam projector is best suited to be used during evening time with minimum ambient light around, using it in bright daylight conditions may cause picture quality to fade and some colors may not be even recognizable. So you got to have curtains that can block good amount of external light seeping into your room to give an acceptable viewing experience during day time and without zoom function for the lens you would have to move it quite a bit around in the room to find the perfect spot to project on the screen/wall. Other than this there is no major flaw with this projector and I am finally satisfied in putting together my big screen entertainment dream on a budget.

Since the quoted LED lamp longevity is for 30,000 hours so even with approx. 8.33 hours of viewing every week this projector would last at least for another 4-5 years easily, I had read observations of visible onscreen lag while gaming and some people from Amazon.com reviews had mentioned about frame rate not being enough for multiplayer games so I tried playing FIFA 15 on Xbox One and some android games from NVIDIA’s Shield tablet I did not notice any evident lag and would test it further with games like COD Black Ops 3 and NFS. Yet to test quality of DTH broadcast on the projector, so eagerly awaiting the start of T20 Cricket world cup.

Posted by KreativeGeek at 4:51 PM No comments: